Occasionally a seemingly ordinary cow or heifer will give birth to a calf with abnormalities. On the surface, everything could look ordinary with the sire too.

Regardless, these abnormalities occurred during gestation and may affect how their body looks, works or both.

0.5 -1.0 percent of calves are born with congenital defects, however not all birth defects in calves are genetic.

Are they all fatal?

No, not all defects are the cause of the animal’s death. In some cases the animal will live a near-normal life.

However, no matter minor it is, it’s best to report the defects – It can cause deficits in gains and health. 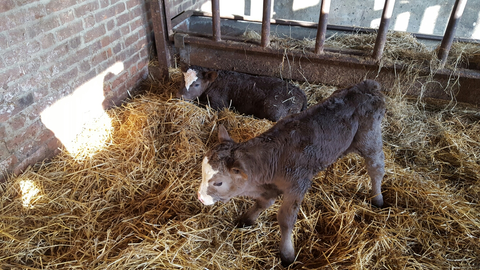 Finding a genetic defect in your herd isn’t the end of the world, however it does mean that come breeding time you’ll need to tread a bit carefully.

Most genetic defects come from recessive genes, so it requires two carriers to pass the defective gene on. If the two carriers reproduce, the calf has a 1 in 4 chance of being affected by the faulty gene.

Here are some genetic defects that you might run into: Atresia (ani, coli, and jujeni) also known as “Blockage” and “No back passage” (waterbelly)

This defect is often described as an animal without a back passage, meaning they do not have an anus.

The animal is born healthy but problems occur once they begin suckling. They cannot pass faeces and will develop a paunched gut.

Surgery can be performed but bodies like the Irish Cattle Breeding Federation note that euthanasia is often more humane because the animal may have blockages in multiple spots.

Calves with a cleft nostril will have a hard time suckling, may regurgitate milk and may develop pneumonia from sucking fluid into their lungs. Calves with a cleft nostril will have a hard time suckling, may regurgitate milk and may develop pneumonia from sucking fluid into their lungs.

The condition can be treated with intensive nursing care, broad spectrum antimicrobial therapy and surgery if the defect is small – although surgical complications are common.

As well as being considerably smaller than an unaffected cow, most animals affected by Dwarfism carry another defect such as cleft palate, overshot jaws or bowed legs.

Dwarfism can vary in presentation, but generally calves are born with a shortened stature, and deformity of the head, spine, and limbs. Animals with this condition have an increased sensitivity to UV light, leading to severe sunburn, and crusting, oozing skin.

This isn’t always caused by genetics however; certain plants trigger the condition if the animal eats them.

However, there may also be a genetic component to that as only some, not all, animals are sensitive to  St. John’s wort, Buckwheat, Bishop’s weed, Spring Parsley, clover and alfalfa, among others.

Signs can be seen in animals affected by the genetic condition as early as a few days post birth and usually manifest as ulcers and scabs on the nose, ear tips, mouth, and lips. Calves with photosensitization may drool excessively due to oral discomfort.

Calves look normal until they are about 2 years of age and then they start to get wobbly in the back end. This wobbliness continues to move up the spine until the animal is uncoordinated and eventually will fall down and cannot rise. It is a devastating disease because it occurs later on in the animals life.

This genetic defect is near impossible to spot in the calf until they are two years of age. At this point their back end begins to get wobbly.

From here, the wobbliness affects more and more of their body, moving up the spine causing the calf to become increasingly uncoordinated. There will come a point where they won’t be able to stand up again. The gene for this has only been recently isolated, but that means it is now testable. It is thought to be more common in Charolais cattle.

This deformity deforms the entire body. Calves afflicted by it usually cannot be delivered regularly and must be retrieved with a cesarean section.

Due to the suspicion of a genetic component, it may be advisable to remove the dam from the breeding herd. 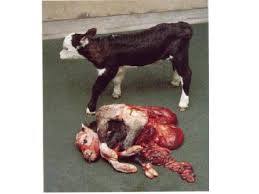 A ventricular septal defect (VSD) is a hole in the septum (wall of the heart) that separates the two chambers of the heart.

This can lead to a calf having difficulty breathing, short of breath and having trouble drinking milk.

If the hold is small, the calf may have a heart murmur and the defect would be discovered in the post-motem.

If the hole is larger, the calf will most likely die. At that point a vet can diagnose VSD.

A calf with a wry neck is born a twisted neck and is unlikely to survive.

Our worst nightmare – the tailless calf defect! This one also does exactly what it says on the tin.

This won’t have much bearing on the life of the calf. However, if it is female, she will never get the joy of wearing a moocall calving sensor!

If you have a tailless calf and you are based in Ireland the ICBF are looking for case studies of tailless calves, and any defect for that matter.

Most calves with this condition die before or shortly after birth. Their skulls have a domed appearance due to an increased volume of cerebrospinal fluid during gestation.

If the calf is born alive, they will show signs of depression, weakness, poor suckle reflex, droopy ears and head, blindness, spasm of the limbs, head tremors, recumbency, and convulsions. It’s appearance is linked to the BVD.

This new virus was first identified in 2011, so much is still being learned about it.

Additionally, it can have a detrimental effect on the nervous system of the calf.

The Zulvac Schmallenberg Vaccine can offer immunity for 6 months which covers the risk period during pregnancy.

If this virus manifests in adult cattle, they can develop a fever and their milk will drop. It can occur as a congenital malformation in newborn or aborted animals.

Of course, this list is far from an exclusive one, and there are many more defects a calf could be born with.

Have you ever had a calf with a birth defect? Were they able to go on with life as normal? Let us know in the comments below!